ChessBase Magazine is the most comprehensive and most sophisticated chess magazine there is. World class players analyze their brilliancies and explain the ideas behind the moves to you, opening specialists present the latest trends in opening theory and offer exciting ideas for your repertoire. Master trainers in the fields of tactics, strategy, and the endgame show you the tricks and techniques a successful tournament player needs! DVD with several hours of video + booklet.Also available for download including the booklet in pdf!

“When even I am sacrificing a piece…“
Anish Giri shows a swift kingside attack from Batumi, introduced by the rook manoeuvre Ra3-g3!

Me and the new engines
Tanmay Srinath rams the Berlin Defence

“Simple and strong!“
Oliver Reeh invites you to a straightforward attack on the king to end with an Epaulettes mate! (video)

Busted on the square g4!
Jan-Krzysztof Duda analyses his endgame victory over Yu Yangyi from the Hamburg Grand Prix

With umbrella and body-check!
Let Karsten Müller show you how to succeed in rook endgames – instructive and practical!

Dubov gem!
Igor Stohl analyzes the stunner Dubov-Svane from Batumi – from the opening duell to the mate final!

Top tournaments with analyses by Caruana, So & Co 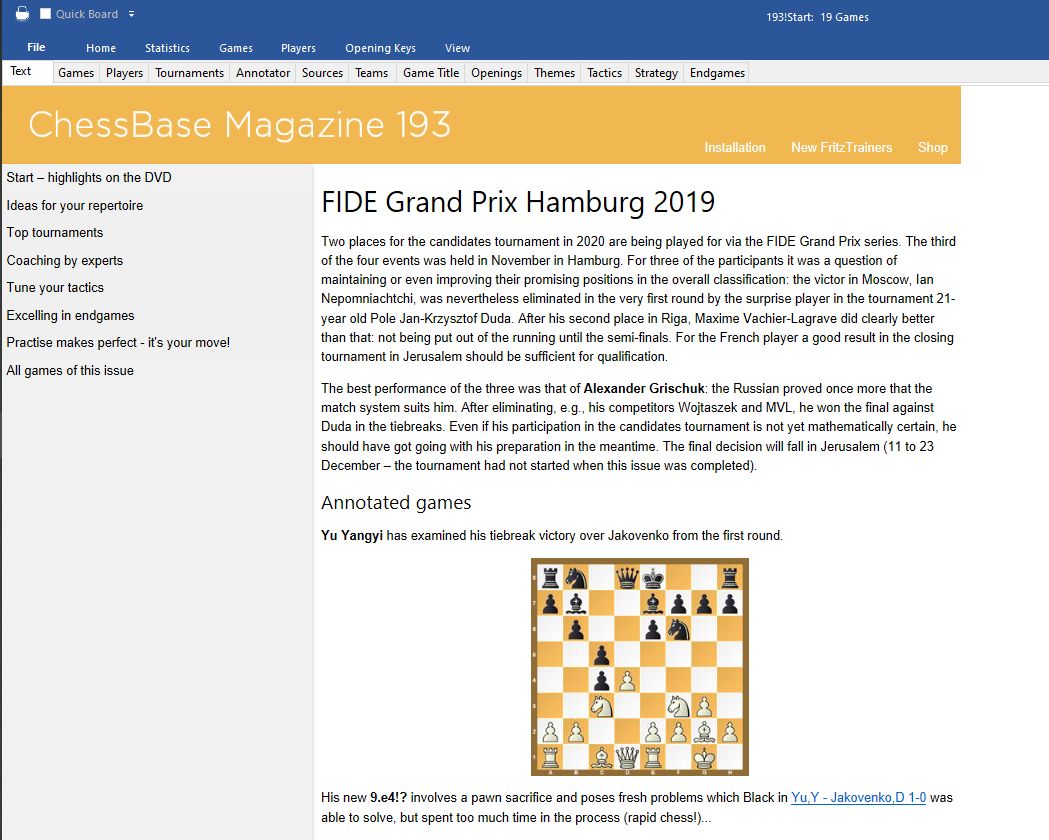 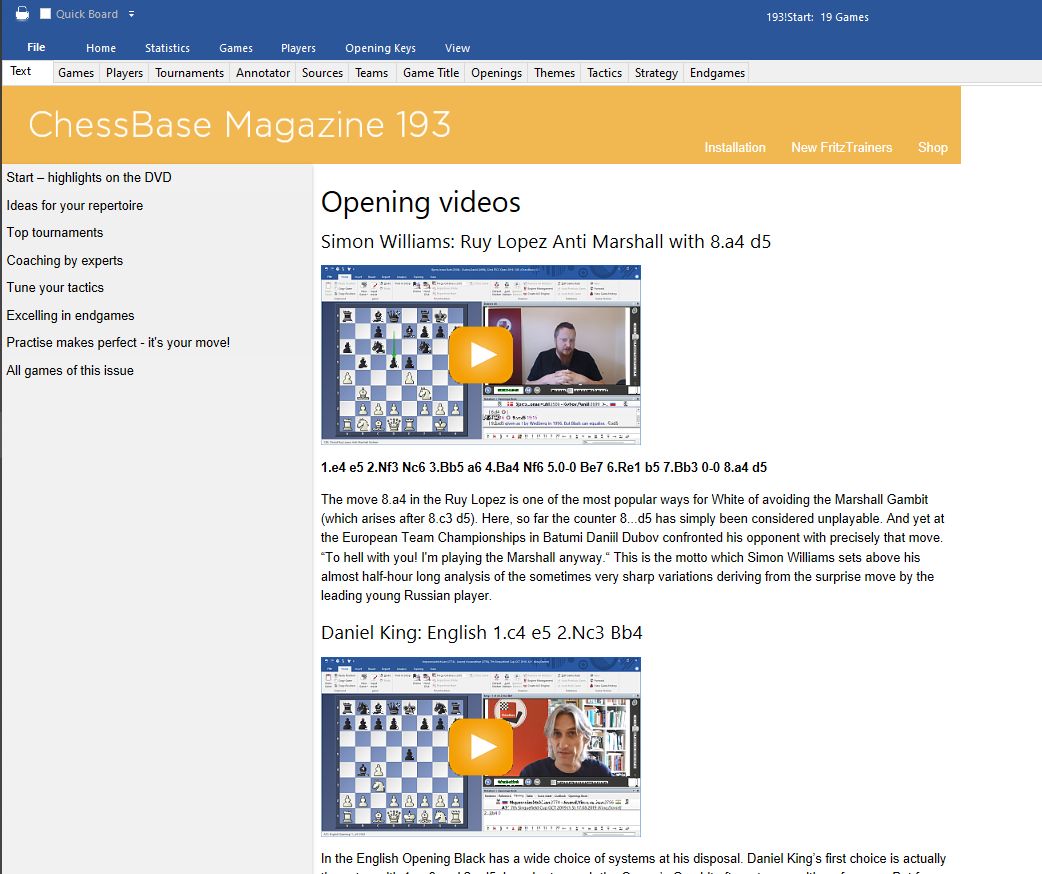 Simon Williams presents a big surprise in the Ruy Lopez from Daniil Dubov (a sort of Anti-Anti-Marshall), Daniel King offers a repertoire suggestion against the English Opening and Alexei Shirov shows another of his successes in the Najdor Variation with 6.h3. 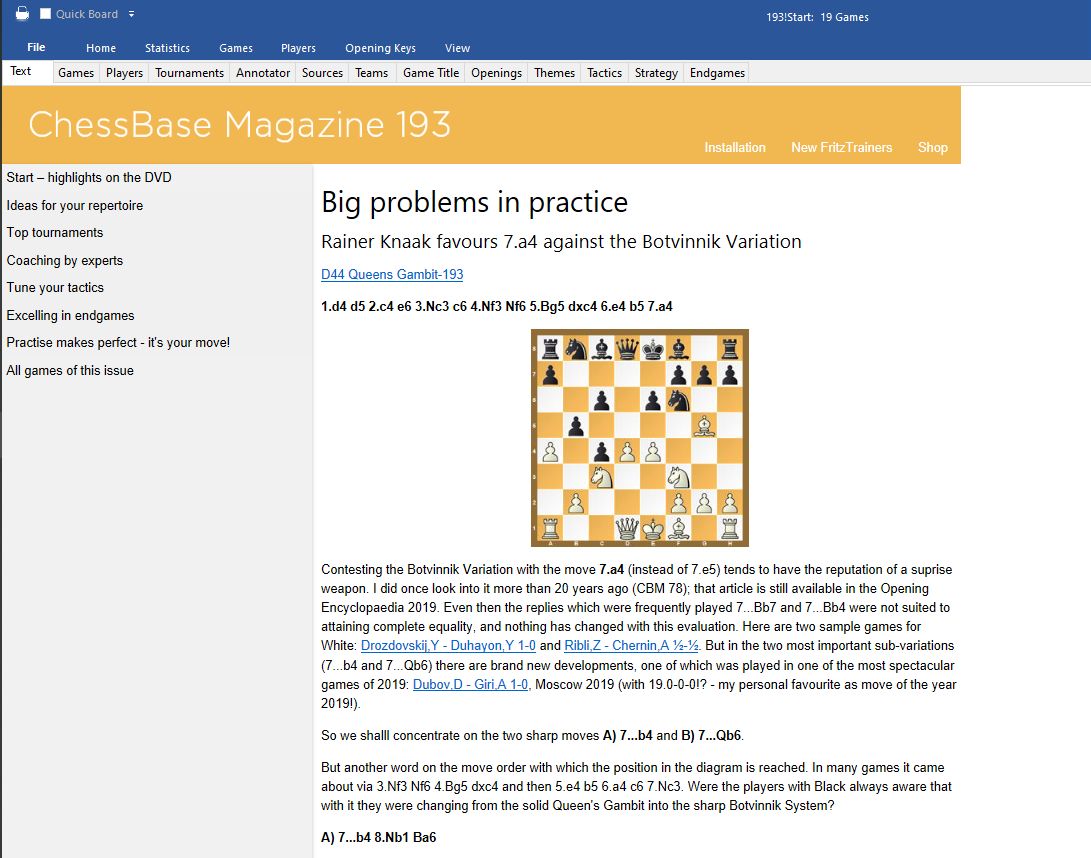 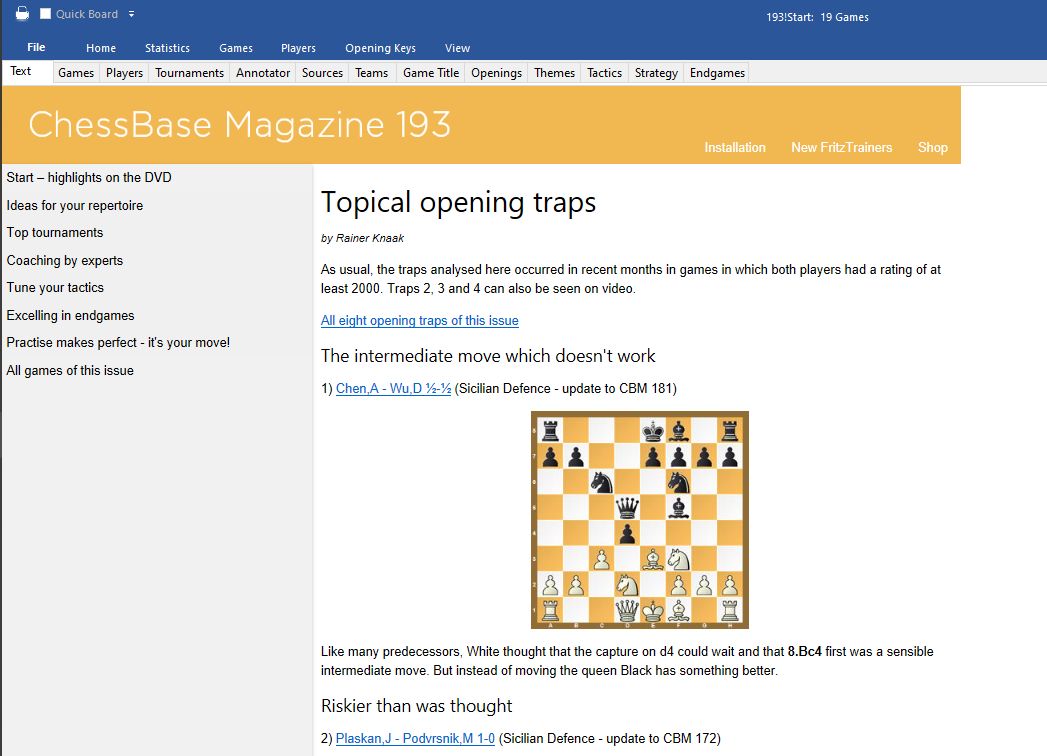 Rainer Knaak presents eight traps from recent tournament practice (including three Fritztrainer videos). This time our expert has found material, e.g., in the Sicilian Defence, the Queen’s Gambit, the English Opening and in the Nimzo and Queen’s Indian Defences. 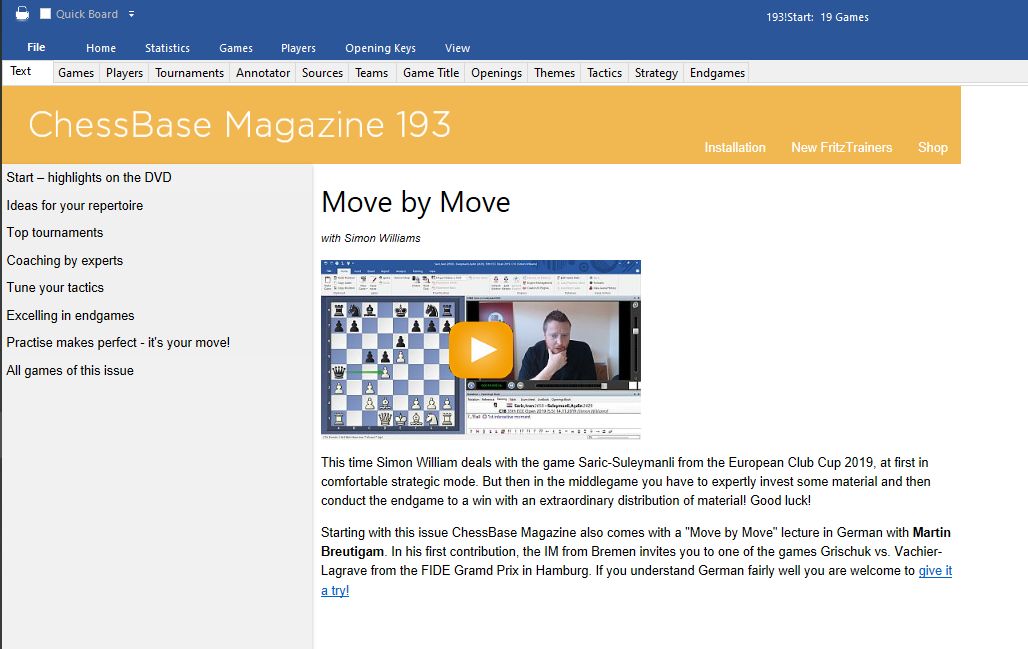 This time Simon William deals with the game Saric-Suleymanli from the European Club Cup 2019, at first in comfortable strategic mode. But then in the middlegame you have to expertly invest some material and then conduct the endgame to a win with an extraordinary distribution of material! 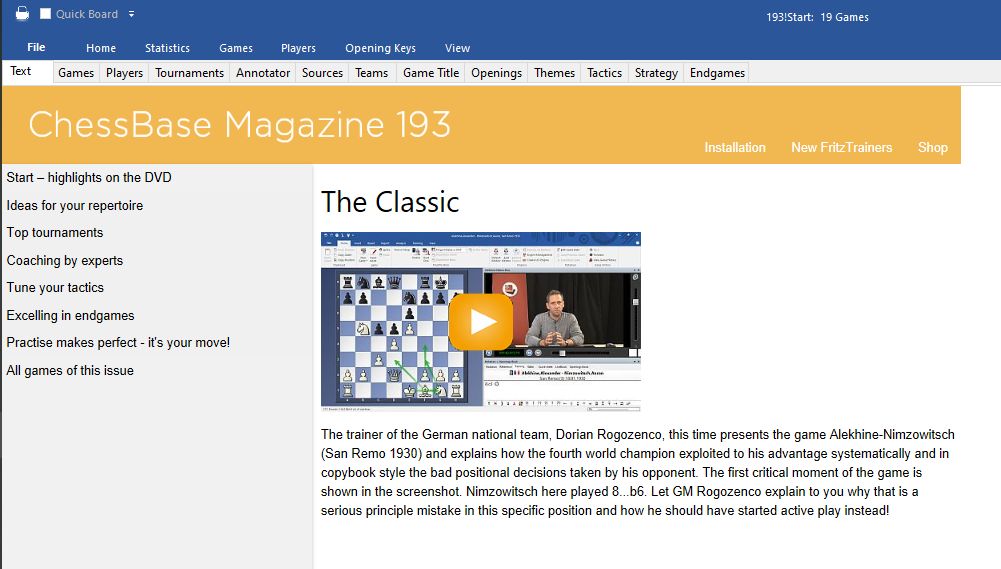 The trainer of the German national team presents the game Alekhine-Nimzowitsch (San Remo 1930) and explains how the fourth world champion exploited to his advantage systematically and in copybook style the bad positional decisions taken by his opponent.

Strategy: The king in the centre - safe and useful 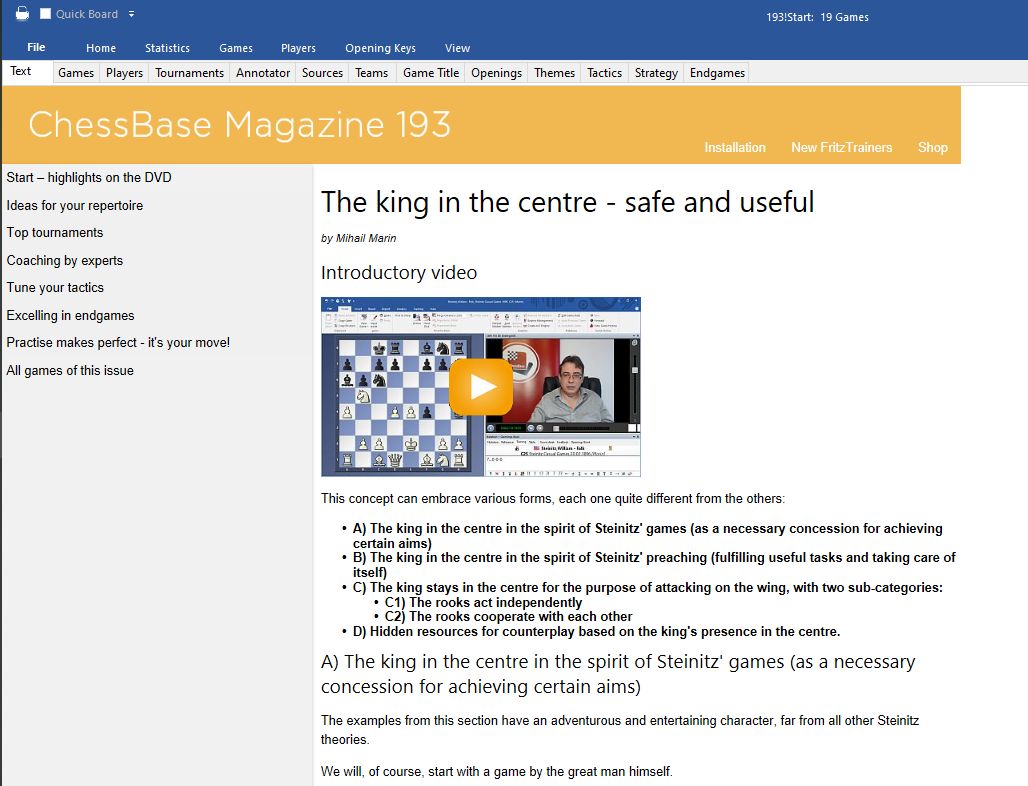 Starting from Steinitz‘ theory that the king can be useful in the centre and that it can look after itself, our strategy expert Mihail Marin examines many entertaining games – from the first all the way to the reigning world champion!

Tactics: “Youth on the retreat” 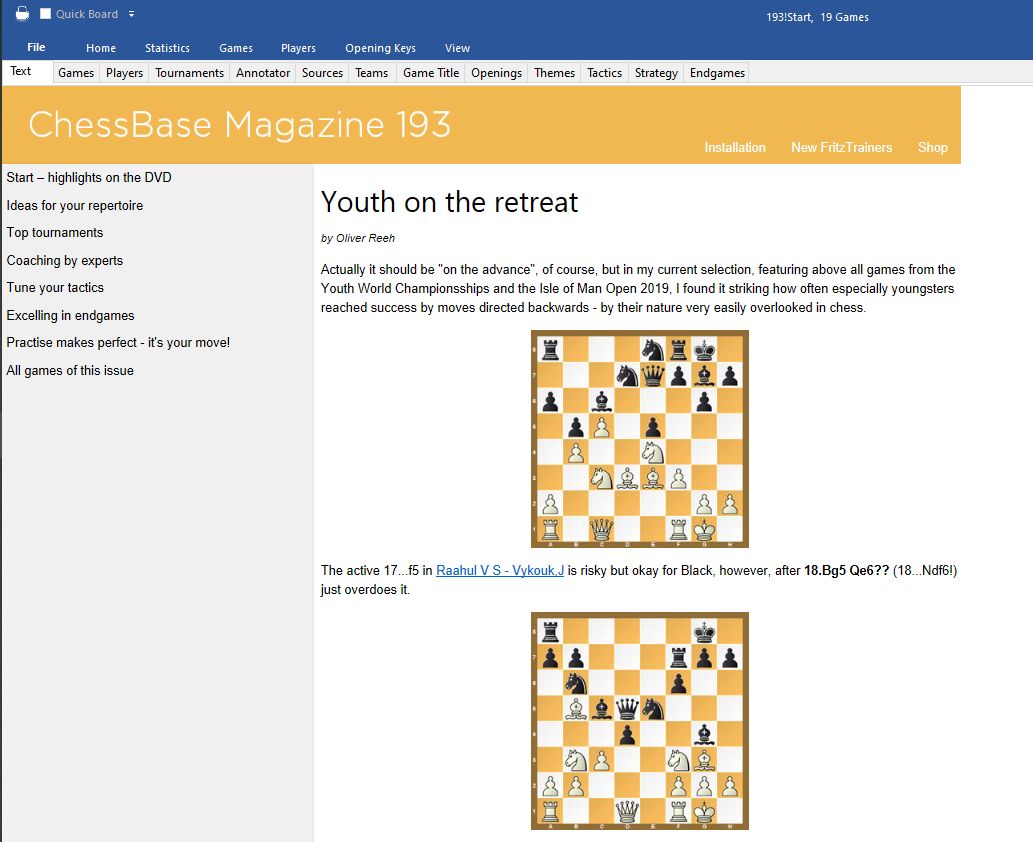 Oliver Reeh’s tactical collection contains 26 recent games, each of which contains at least one task. In addition, the IM from Hamburg presents three of his favourite combinations in our interactive video format. 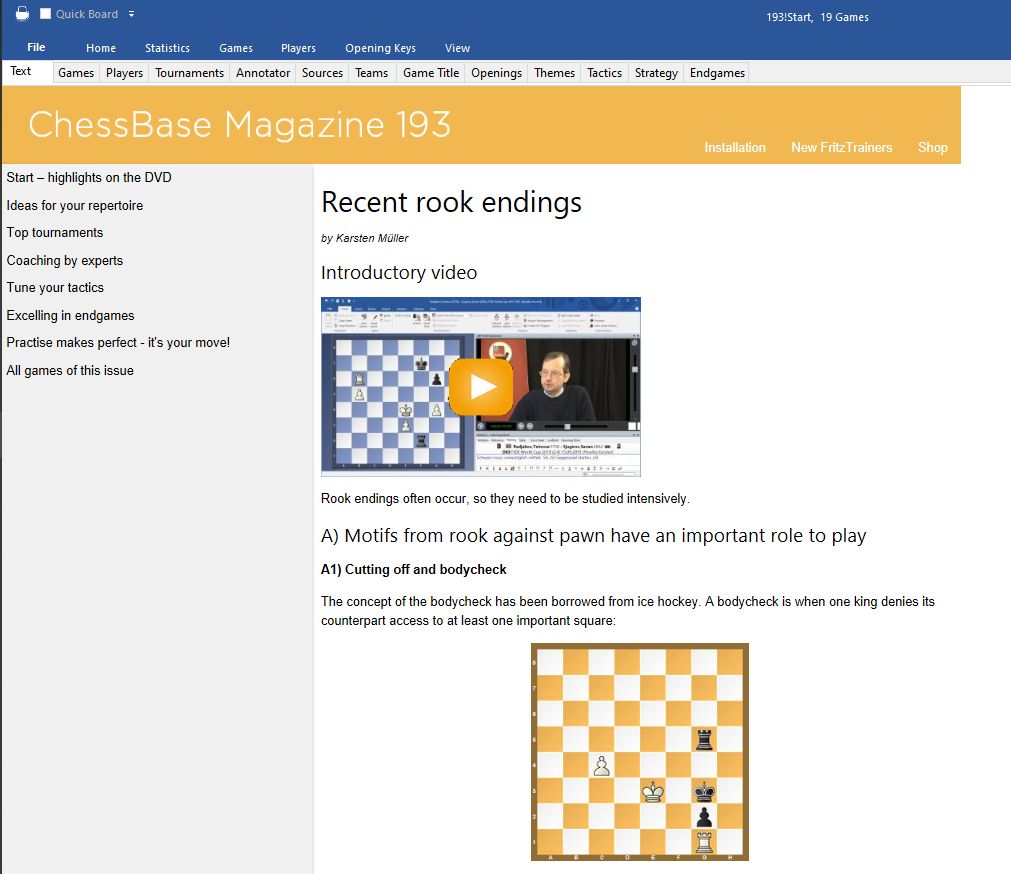 Think of all you need to know in rook endings! Karsten Müller presents many of the important techniques, motifs and rules of thumb. Plus video training with over an hour’s total running time!